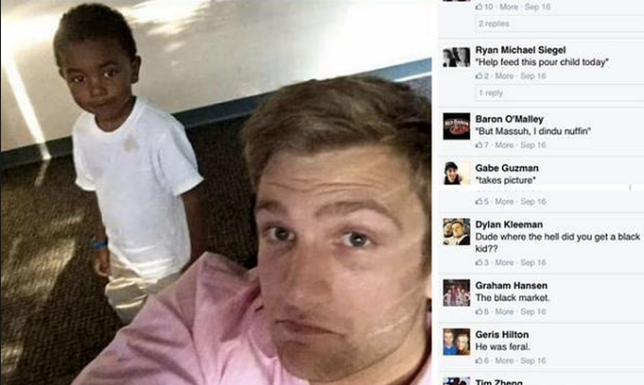 What sort of people would think this is funny to post a picture of a 3 year old child and make the child the centre of their racist and abusive comments.

This man took a picture with his coworker’s son and posted on his facebook page. The boy’s mother, Sydney Jade, was a coworker of Hilton’s.

What is surprising to me is this man felted entitled to take a picture of a minor without the mother’s consent and posted on facebook. To then project such racism, the language was so blatantly brutal, offensive and degrading, just shows how inhumane white people are.

Jade the mother of the three year old described her office as small, “…there’s only 10 people. We all hang out,”…tightly knit group.” Therefore, she never anticipated such dysfunctional behaviour.

Racism is present, no doubt, but never did I think that this would result to a grown group of people publicly viciously attacking a child. To this point am just surprised the sort of abuse white people use against black people in the name of racism. It is so vile, my mind can’t comprehend. Surely if black people acted in this way they would be justified because of the amount of abuse projected, but for white people, not being the victim, having this really sick, vile, twisted psyche is illustrating a real sickness.